WHAT ARE SOME EXAMPLES OF SCAMS

What it is: Phishing is one of the most common cyberthreats around, yet it continues to be equally as effective. Phishers take on the persona of someone trustworthy - a friend, neighbor or colleague - in an attempt to get you to hand over information or click a malicious link via email, social media or other messaging apps like WhatsApp.

Phishing attempts take place worldwide every single month and while they often take place through email, cybercriminals are expanding their approach to cover wherever you might talk with someone one-on-one on the internet.

How to spot it: The most important step in spotting a phishing attempt is to take your time reviewing the email or message. This will help you spot inconsistencies, like misspelled names, poor grammar in the text and links that don't lead to the place they should.

For the last one, hover over a link with your mouse cursor if you're unsure of it. In the bottom left-hand corner, you'll see the full URL - and know if they're sending you to a real or scam website.

What it is: If you're browsing the web and all of a sudden you get a pop up saying that your computer is now infected, chances are it's an online scam.

In reality, these fake antivirus software ads and pop ups want you to download their free software, which will only give you a virus, malware or ransomware, among other cyberthreats.

How to spot it: Only trust virus information from your antivirus - and if you don't have one, make sure to get one now.

Be wary of any pop ups with flashy lights or that urge you to take action immediately by downloading an application. A real antivirus solution, like Norton AntiVirus Plus, will take care of your issues in the background and while it may ask you to take an action, it'll likely only notify you once the cyberthreat has been resolved.

What it is: We'd all like to make easy money quickly, and cybercriminals use that to prey on unsuspecting users.

These scam websites, which often say you can make a week's worth of salary in just a few hours, lure you in with false promises. They then get you to hand over personal and financial information, often sensitive by nature.

How to spot it: A little bit of common sense goes a long way. While we all dream of being paid large sums of money in exchange for doing nearly nothing, the chances of that being real are slim.

If you're considering a make money easy and fast scam, be on the lookout for advertisements that say it takes little to no skill to get involved, that you can set your own hours or that you need to pay to get started. If the method to earn easy and fast cash really existed, it's unlikely it'd be widely shared.

What it is: Here's a two-parter: there are thousands of websites out there which try to make you believe they're the real deal and a part of your favorite brands. These websites, which are mostly unknown, try to scam you, even giving you "great deals" that are up to 75 percent off.

Similarly, groups of cybercriminals are now commonly using formjacking - a new cyberthreat that steals credit card information. This can happen when a legitimate e-commerce website is hacked (without the owners knowing), allowing cybercriminals to redirect you to different URLs in the payment process that look similar but actually steal your information.

How to spot it: E-commerce scam websites have a few commonalities. They often have similar but not identical URLs to the brand they're trying to imitate. They also likely have spelling errors and unbelievable prices that you won't find anywhere else - because they're not real. Instead, they either ship you fake items or take your money and don't give you anything in return.

Keeping on the lookout for formjacking is more difficult. As you enter the page to put in your credit card details, double check the URL to make sure you're still on the exact same website that you came from. These cybercriminals will often change the URL very slightly - like adding or taking away a single letter - to avoid detection.

What it is: Taking the form of either a phone call or an advertisement, tech support impersonators contact a user to tell them that their computer or device is infected - often without even seeing the device beforehand.

After prompting the user to download an application that lets them control the computer remotely, these cybercriminals download actual viruses or give the illusion that something is wrong with the device. Then, they ask for money to fix the problem.

How to spot it: Know that Microsoft, Google, Apple - pick whichever company you want - will never ever call you to tell you that something is wrong with your computer. At the very most, they may send an email saying that something is wrong with your device and that you should call them. Always double check that these numbers are the real support numbers via a Google search.

Similarly, be wary of any tech support that charges large sums of money to fix your PC or Mac. These sums often total half or more of what the actual device is worth. Scam websites can also pay for advertising on Google to show up when someone searches for tech support, which means your best bet for getting help for your device is often contacting the manufacturer itself.

Each year, millions of elderly Americans fall victim to some type of financial fraud or confidence scheme, including romance, lottery, and sweepstakes scams, to name a few. Criminals will gain their targets' trust and may communicate with them directly via computer, phone, and the mail; or indirectly through the TV and radio. Once successful, scammers are likely to keep a scheme going because of the prospect of significant financial gain.

Seniors are often targeted because they tend to be trusting and polite. They also usually have financial savings, own a home, and have good credit-all of which make them attractive to scammers.

Additionally, seniors may be less inclined to report fraud because they don't know how, or they may be too ashamed at having been scammed. They might also be concerned that their relatives will lose confidence in their abilities to manage their own financial affairs. And when an elderly victim does report a crime, they may be unable to supply detailed information to investigators.

With the elderly population growing and seniors racking up more than $3 billion in losses annually, elder fraud is likely to be a growing problem.

If you believe you or someone you know may have been a victim of elder fraud, contact your local FBI field office or submit a tip online. You can also file a complaint with the FBI's Internet Crime Complaint Center.

When reporting a scam-regardless of dollar amount-include as many of the following details as possible:

You are also encouraged to keep original documentation, emails, faxes, and logs of all communications.

The former director of the FBI and CIA is warning older people-as well as their loved ones and caregivers-to be aware of elder fraud schemes. "If it can happen to me, it can happen to you," says Webster, 98, who was the target of a lottery scam in 2014.

"If it can happen to me, it can happen to you," warns former FBI and CIA Director William Webster in a video message that urges older people and their loved ones to be wary of elder fraud schemes.

The 98-year-old retired judge and his wife Lynda were prospective marks in a Jamaican lottery scam in 2014 when an unsolicited caller informed Webster he won a sweepstakes. To collect his winnings-a car and millions of dollars-Webster was told he needed to pay $50,000. When the couple declined repeatedly, the caller became abusive and threatening. The Websters called the FBI and later worked with special agents in the Washington Field Office to nab the scammer, who is now serving time in prison.

The Websters are among millions of older Americans targeted each year in elder fraud schemes like bogus lottery and romance scams. Fraudsters string along victims with promises of love or riches in exchange for cash advances or assistance moving illegal funds. Losses from these types of scams reach into the hundreds of millions each year and are increasing as the U.S. population ages.

The Websters' case was featured on fbi.gov in 2019 and garnered national attention. The couple hopes the new public service announcement (PSA) will remind older people, their families, and caregivers that they need to maintain their guard against sophisticated schemes.

"Since we have become involved with this issue, we've heard sad stories of millions of dollars stolen, lives threatened, and even suicides," Lynda Webster said. "My husband has been targeted for years. And when one scammer threatened our lives we knew we had to act."

The PSA includes archival images of Webster as a Navy officer in World War II and Korea and later as a federal judge and head of the country's premier intelligence and law enforcement agencies. The scammer who targeted the Websters didn't know this background, just that Judge Webster was older and might therefore be susceptible to cons that prey on traits like trustworthiness, loneliness, and a yearning for more financial security. 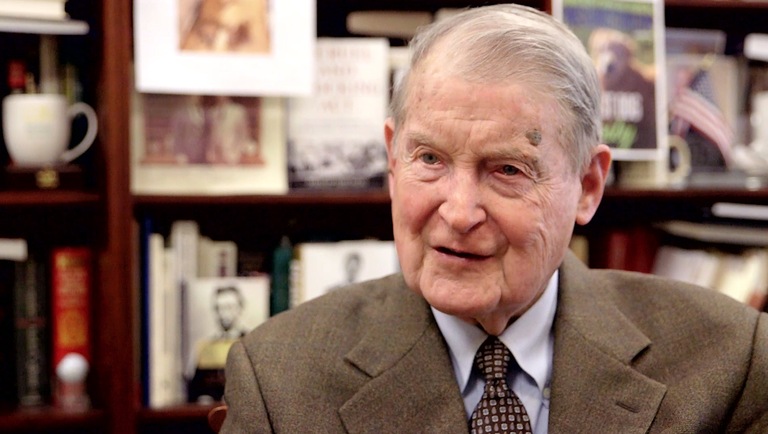 In 2019, Director Webster discussed the Jamaican lottery scheme that targeted him and his wife Lynda. The couple worked with the FBI to capture the caller, who was arrested and sentenced to prison. Learn more

"Scammers will spend many hours and days talking to their targets, getting to know them, offering friendship and even the promise of love," Lynda Webster said. "They are skillful con artists, and family members and close friends should be aware."

Lynda Webster paid close attention to the scammer's phone calls to her husband, who invited her to listen in. In many cases, scam victims won't divulge they were victimized because they are too embarrassed or don't know where to turn. Lynda Webster was particularly vigilant because her own father was victimized in an investment scheme that cost the family a small fortune.

"It's in every family's interest to stay vigilant," Lynda Webster said. "As loved ones, we must be lovingly watchful of the well-being of the elderly in myriad ways. As seniors' mental acuity declines, their judgement erodes, and it's the family's responsibility to protect them from the people who will prey upon them."

If you believe you or someone you know may have been a victim of elder fraud, contact your local FBI field office or submit a tip online. You can also file a complaint with the FBI's Internet Crime Complaint Center, or IC3.

"Scammers will spend many hours and days talking to their targets. They are skillful con artists, and family members and close friends should be aware."

We have been getting numerous calls the past couple weeks of people calling our phone numbers back after having missed calls. They are being made from someone who is spoofing our number to appear like it's the Mountain View Police Department calling.

What is spoofing in simple terms?
Spoofing is a broad term for the type of behavior that involves a cybercriminal masquerading as a trusted entity or device to get you to do something beneficial to the hacker - and detrimental to you. Any time an online scammer disguises their identity as something else, it's spoofing.
Our phone numbers that are being spoofed are 870-269-4211 and 870-269-5671.  If you have any questions give us a call to verify and dont give any personal information out over the phone.